The following three organizations will be explained as examples. 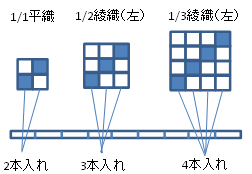 Basically, put each organization in one of the reeds. 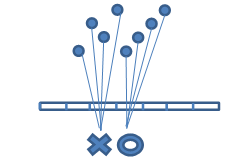 Basically, the warp threads are put into the heald in order.
１→２→３→４→１→２→３→４→・・・
For example, when a plurality of threads are broken, a mistake may be made as shown in the left figure when re-threading the threads.
The fabric has streaks in the vertical direction.